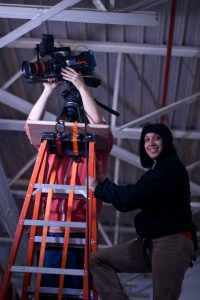 Atlanta has been in the process of becoming the next big thing in the realm media over the past couple of years, in the fields of film, television and gaming. Many movies and television series are being filmed in locations that are easily recognized by locals and game developing companies are springing up everywhere in the Metro Atlanta area. Even with all of this boom in media production, we don’t have the human resources to be able to fill this need for media production in Georgia. At least, that was the case until the establishment of the Georgia Film Academy.

The Academy is currently being lead by Jeff Stepakoff, someone who has been in the film industry for 28 years. Those assisting him in ensuring that the program is successful in nurturing students into the industry include Kate McArdle, whose worked as a producer and creative executive for 20 years, Barton Bond who has over 20 years experience in public radio and television, and Dr. Aaron Levy, an Associate Professor of Creative Writing and English Education at Kennesaw State, as well as many other individuals who are greatly suited to pass on their knowledge and experience.