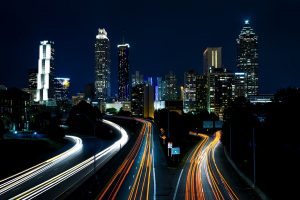 While Atlanta’s recently booming film productions are giving a lot of new life to Atlanta’s economy, it is also changing the lives of locals who have to deal with the constant signs of filming and large equipment set-ups. What once was a glamorous and awe-inspiring industry has left many Atlantans wishing Hollywood would stay in California. If you saw a movie celebrity walking down the street in Atlanta before the boost in film production, you’d probably flip your lid trying to get their attention and their autograph. Nowadays, nobody even bothers noting them because they are too common a sight.

Atlanta has always been known for it’s heavy traffic going throughout the city, which is probably why it contains one of America’s most deadly interstate roads. Herbert Williams, the owner of Vintage Barber Shop in downtown Atlanta, has many issues with film crews coercing shops to close while they film in particular areas and only offering as little as $300 a day to close. Having to temporarily shut down your business and receive less payment than you would make in a day’s worth of earnings is definitely less than ideal. This not only affects the businesses who close, but now the consumers have to find somewhere else to go that may not be as readily available. Add the fact that filming blocks off roads and that Atlanta is filled with one-way streets, you’ve just created a recipe for constant nightmarish traffic and potential traffic accidents.

Hopefully in the near future, the filming industry and the Atlantan business owners and locals will find a way to work together in a way that benefits everyone, but in the meantime, it looks like everyone will just have to grin and bear through another Marvel movie production.